To share your memory on the wall of Anne Spitler, sign in using one of the following options:

Anne Marie Morrison Spitler, 80, of Stephenville, died Sunday, March 17, 2018 in Stephenville after a brief illness. Anne was born on May 11, 1938 in White Oak, Texas to the late Joe and Marie (Squires) Morrison. She graduated as salutatorian from White Oak High School, received her bachelor’s degree from Texas Tech University in Mathematics/Education, and earned a master’s degree from Abilene Christian University. She taught mathematics for 30 years at Sweetwater High School and served as chair of the department. Anne also served as a longtime elder at First Christian Church of Sweetwater and was a member of the First Christian Church of Stephenville. She was a proud breast cancer survivor for many years. She spent the past 5 years in Stephenville, moving from Sweetwater to be near her beloved family.

Anne was preceded in death by her parents; her sisters, Betty Brooks and Molly Pattillo; and a nephew, David Pattillo.

Visitation with the Spitler family will be 6:00 PM to 8:00 PM Saturday, March 23, at Stephenville Funeral Home. Funeral services will be held at 2:00 PM, Sunday, March 24 at Rocky Point Baptist Church with Art Gartside officiating. Burial will follow at Allard Cemetery.

The Spitler family suggests memorial gifts to a public library of the donor’s choice.
Read Less

To send flowers to the family or plant a tree in memory of Anne Marie Spitler (Morrison), please visit our Heartfelt Sympathies Store.

Receive notifications about information and event scheduling for Anne

We encourage you to share your most beloved memories of Anne here, so that the family and other loved ones can always see it. You can upload cherished photographs, or share your favorite stories, and can even comment on those shared by others.

Posted Mar 24, 2019 at 10:03pm
I was saddened by Anne's passing when I read her obituary in the Sweetwater Newspaper. Anne and I attended Newman High School in Sweetwater, Texas, during 1953-1956. I remember her as being very intelligent and knowlegible and was the only female student in our Physics class. My wife and I sat with her during our 50th Class Reunion in 2006 so I was able to become reacquainted with her. We enjoyed this very memorable occasion. May the Lord be with her family members and His blessings be with each of them. Our thoughts and prayers are with them during their grieving.
Comment Share
Share via:
K

Posted Mar 19, 2019 at 08:46pm
Memaw will forever have a special place in my heart as well as the Back at the Ranch Family’s heart. I loved her visits and will cherish them always. ❤️
Comment Share
Share via:
MW

Posted Mar 19, 2019 at 03:40pm
We know Memaw was such a blessing to your family and a treasured lady. Our heartfelt condolences.

Graceful Wreath was purchased for the family of Anne Spitler. Send Flowers 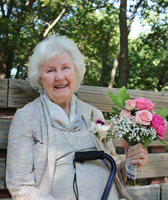