To share your memory on the wall of Doris Huckabee, sign in using one of the following options:

Provide comfort for the family of Doris Huckabee with a meaningful gesture of sympathy.

Doris Arlene Huckabee, 88, of Stephenville, passed away on Monday, June 10, 2019 in Stephenville.

Doris Arlene Huckabee, 88, of Stephenville, passed away on Monday, June 10, 2019 in Stephenville.

Funeral services will be held at 10:00 AM Tuesday, June 18th at Stephenville Funeral Home Chapel. Burial will follow at Erath Gardens of Memory Cemetery. Visitation will begin at 9:00 AM, one hour prior to services with the Huckabee family.

Doris was born on September 23, 1930, in Harlingen, Texas, to the late O. C. and Maggie Lou Williams Vinson. She married Ernest Huckabee on January 16, 1949 in Floydada. Ernest preceded her in death on August 30, 1999. Doris spent over 28 years as secretary with the Stephenville ISD at the Junior High School. She was an endowed member of the Eastern Star for 68 years, a member of chapter 801 in Stephenville, and past member in Floydada, TX. She served as secretary, and as a past matron for both chapters. Doris was a member of the Oakdale United Methodist Church, and has lived in Stephenville since 1960.

The Huckabee family wishes expressions of sympathy be made in the form of donations to St. Jude’s Children’s Hospital in Nashville, TN.
Read Less

To send flowers to the family or plant a tree in memory of Doris Arlene Huckabee (Vinson), please visit our Heartfelt Sympathies Store.

Receive notifications about information and event scheduling for Doris

We encourage you to share your most beloved memories of Doris here, so that the family and other loved ones can always see it. You can upload cherished photographs, or share your favorite stories, and can even comment on those shared by others. 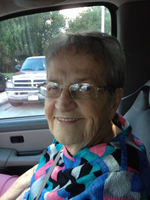