To share your memory on the wall of J M \"Pete\" Grundy, sign in using one of the following options:

Funeral Services will be held at 2:00 pm Tuesday, March 5, 2019 at the Stephenville Funeral Home Chapel with Rev. Anthony Svajda officiating. Interment will follow at the Hannibal Cemetery in Erath County. The family will receive friends from 6:00 pm until 8:00 pm Monday at the funeral home.

Pete was born on January 4, 1920 in Hood, Texas to the late John and Mary Finley Grundy. He married Louise Nolan on July 11, 1940 in Marietta, OK and they were married for 71 years before her passing on February 28, 2012. Pete served in the U.S. Navy during WWII and was a member of the American Legion. He operated a dry-cleaning business for many years and was an inspector for LTV before his retirement. He was a member of Harvey Baptist Church in Stephenville.

He is survived by his children, Don Grundy and wife Utona of Stephenville, Carolyn Dunn of Arlington, Vickie Little and husband Lee of Stephenville; twelve grandchildren; 23 great-grandchildren; 14 great-great grandchildren; and a sister, Madge Cottrell of Oklahoma City.
He was preceded in death by his parents, John and Mary Grundy; his wife, Louise Nolan Grundy; a son, J.D. Grundy; three brothers, and seven sisters.

To send flowers to the family or plant a tree in memory of J M "Pete" Grundy, please visit our Heartfelt Sympathies Store.

We encourage you to share your most beloved memories of J M "Pete" here, so that the family and other loved ones can always see it. You can upload cherished photographs, or share your favorite stories, and can even comment on those shared by others.

Posted Mar 03, 2019 at 12:55pm
So Sorry for your loss. I remember Pete as being a quiet good man with a good heart. Shiony
Comment Share
Share via:
RE

Posted Mar 02, 2019 at 07:41pm
On behalf of Turnbow-Higgs American Legion Post 240 I express condolences to the family and friends of James T. 'Pete' Grundy. I last saw Pete at the November of 2018 Huckabay ISD veterans appreciation day. His family had accompanied him to this event and he was proudly adorned in his American Legion garrison cap. A patriot to the end, Pete struggled to stand but with the help of family he stood and saluted the flag when presented and continued to stand for the singing of National Anthem. Pete was a WWII Navy Veteran and his passing reduces the number of WWII American Legion Post 240 veterans to 4. Nationally, we're losing 360 per day of 'OUR GREATEST GENERATION' of WWII veterans. The Commander of all creation has called James T. 'Pete' Grundy to Post Everlasting. Anchors away sailor, and THANK YOU FOR YOUR SERVICE! - Roger Easter
Comment Share
Share via: 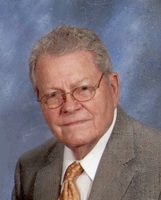