To share your memory on the wall of Jessie Coffee, sign in using one of the following options:

Jessie ‘Theo’ Tillman Coffee, 83, of Stephenville, passed away on Monday, August 5, 2019, in Stephenville

Jessie ‘Theo’ Tillman Coffee, 83, of Stephenville, passed away on Monday, August 5, 2019, in Stephenville

Funeral services will be held at 11:00 AM Friday, August 9th at the First United Methodist Church with Reverend Howard Martin officiating. A private family burial will take place next to her loving husband of 49 years, David O. Coffee after the conclusion of services. A public visitation will be 6:00 PM to 8:00 PM Thursday at Stephenville Funeral Home.

The world became blessed on July 16, 1936 when Theo was born in Kerens, Texas. She was the youngest of five daughters born to John Cureton and Jessie Myrtle Marshall-Tillman. At the age of four her family moved to Blooming Grove, Texas after the death of her father. She inherited the ‘Texas tough’ spirit from her mother, who raised five daughters in difficult times. Theo and her older sisters helped by picking cotton in the afternoons after school. After graduation from Kerens High School, she then attended Navarro Junior College in Corsicana, Texas where she met the love of her life at a dance. Theo married David Coffee on August 10, 1956. The couple then moved to Austin where David attended the University of Texas followed by Department of Public Safety Academy. They moved to Stephenville in 1961. Theo was a bookkeeper, and retired from the county in 1996.

Theo will be greatly missed, but lovingly remembered by her family and friends. Theo is survived by her daughter, Phyllis Adams of Stephenville; granddaughters, Lauren Adams Saxon and husband Brandon of Bluff Dale, and Kristy Adams Everett and husband Rett of Fort Worth; six great grandchildren, Tristian Saxon, Harper Saxon, Jessie Saxon, and Tanner Saxon, Graham Everett and Hudson Everett.

The Coffee family wishes to thank the many friends and neighbors who gave their love and support to their sweet mother and grandmother.

The Coffee family also wishes expressions of sympathy be made in the form of donations to the First United Methodist Church.
Read Less

To send flowers to the family or plant a tree in memory of Jessie Theo "Theo" Coffee (Tillman), please visit our Heartfelt Sympathies Store.

Receive notifications about information and event scheduling for Jessie

We encourage you to share your most beloved memories of Jessie here, so that the family and other loved ones can always see it. You can upload cherished photographs, or share your favorite stories, and can even comment on those shared by others.

Posted Aug 08, 2019 at 01:57pm
My heart will forever have a piece of Theo, and I am very thankful for that. My days as her therapist always brought me happiness. My condolences.

Sweet Tranquility Basket was purchased for the family of Jessie Coffee. Send Flowers 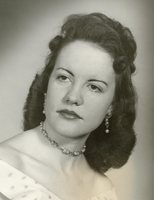