To share your memory on the wall of John Lewis, sign in using one of the following options:

A celebration of his life will be held Tuesday, October 15, 2019 at 6pm at Selden Baptist Church, Selden.

John was born on October 15, 1934, in Dallas to Earl and Elizabeth McDowell Lewis. He married Margie Ann Janzen on May 14, 1955 in Inman, Kansas. Margie preceded him in death on December 27, 2009. John served in the U. S. Navy during the Korean War as an Air Traffic Controller in Great Bend, Kansas where he and his wife had their first child. After moving from Great Bend to Arlington, Texas for 8 years they returned to Buhler, Kansas to finish raising their two daughters. They then moved to the mountains in Tehachapi, California where “Pat” raised rabbits on a commercial basis for many years. Pat later served the State of California as a correctional officer within the prison system. John loved his family, especially his four grandchildren. He built a fort for them complete with bedroom and kitchen facilities. He taught his oldest grandson how to drive in the pasture, and showed him how to use old coke cans to go target shooting. He enjoyed life in the great outdoors on the family’s farm. He built three homes his family lived in over his married life, and got his pilot's license so he could fly around in his Cessna airplane on the weekends. He loved to fly, often taking his family flying over the mountains & towns where they’d drop in for lunch or supper. When John retired, he and Marge returned to Texas, settling in Erath County and bought land in the Selden area. John was active at Harvey Baptist Church in Stephenville for many years and in his last few years became active in the Selden Baptist Church.

Besides his parents and wife, John was preceded in death by daughter, Kathy Lewis Stanton; an infant sister; brothers, Eugene and Joseph; sister, Ilene; and nephew Timothy Lewis.

In lieu of flowers memorials may be made to TEENS FOR CHRIST c/o Selden Baptist Church in Pat’s name.
Read Less

To send flowers to the family or plant a tree in memory of John Patrick Lewis, please visit our Heartfelt Sympathies Store.

Receive notifications about information and event scheduling for John

We encourage you to share your most beloved memories of John here, so that the family and other loved ones can always see it. You can upload cherished photographs, or share your favorite stories, and can even comment on those shared by others. 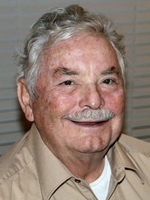