To share your memory on the wall of Sam Taylor, sign in using one of the following options:

Sam was born on November 17, 1934 to Elizabeth and Rufus Taylor in Alexander, Texas. On July 2, 1955 he married his high school sweetheart and love of his life, Joy Lee McLarty. They celebrated their 64th wedding anniversary this summer. Together they had four children, ten grandchildren and 10 great-grandchildren. Recently after a family picture, Sam proudly turned to Joy and said “can you believe we started all this?”

As a young boy, Sam developed his lifelong love for dogs, hunting and fishing. Well into his eighties he was still enjoying his late night coon hunts with his friends and hounds. One night about ten years ago, when he was in his seventies, they were on a hunt on a freezing cold night in January when one of his beloved hounds got trapped in a creek. With snow on the banks, Sam, without hesitation, jumped into the freezing, neck deep water to save his dog from drowning.

While in high school, Sam was a standout running back and linebacker for Stephenville High School. Following graduation from North Texas State University, his passion for sports led him to a career in coaching at his high school alma mater in Stephenville. Starting out as a junior high coach, Sam worked his way up to head football coach, head girls basketball coach, and athletic director of Stephenville ISD. Throughout the years, countless men and women have expressed to Sam and his family the wonderful and profound impact “Coach Taylor” had on their lives. One of the proudest moments of Sam’s life was when he coached a wonderful group of girls to Stephenville’s first and only State Championship in basketball in 1968. Coach Taylor’s successful coaching career culminated with his induction into the Stephenville Athletic Hall of Fame in 1993.

Sam retired from coaching in 1971 and moved his young family to Dublin to embark on a long and successful career in business. He and Joy owned and managed Taylor-Harbin Propane Company for many years. Sam was a founding director and shareholder of two banks, Cross Timbers Savings and Loan in Stephenville and Dublin National Bank in Dublin. In 1990 Sam acquired Taylor Feed Store in Stephenville and, along with his sons Tim and Todd, managed it for 25 years. One of Sam’s favorite past times was tending to his land and cattle, which he continued to do until recent months. In addition to his business pursuits, Sam served his community as the elected President of the Dublin ISD School Board for many years.

Sam’s endearing legacy is best described by his complete and unconditional devotion to his family. If a trip or activity didn’t involve his family, he didn’t have much interest in it. Nothing in life gave him more pleasure than supporting his children, grandchildren, and great-grandchildren no matter what they did. He enjoyed attending their sporting events, rodeos, and school programs, and especially enjoyed simple family time. From youth rec hall activities all the way through high school, not only did he regularly attend their games, one could usually find him watching their practices as well. Sam was the consummate family man.

To send flowers to the family or plant a tree in memory of Sam Edward Taylor, please visit our Heartfelt Sympathies Store.

Receive notifications about information and event scheduling for Sam

We encourage you to share your most beloved memories of Sam here, so that the family and other loved ones can always see it. You can upload cherished photographs, or share your favorite stories, and can even comment on those shared by others.

Posted Jul 26, 2019 at 10:07pm
Sam was a joy to be around. For many years he always had a smile for me when I went in the feed store. I remember a football game we went to in Lubbock many years ago. I was happy to see Sam there & that infectious smile when he saw me. May his family fine comfort in the promise from God that they will see that smiling face again.
Comment Share
Share via:
J

Posted Jul 25, 2019 at 06:46pm
I remember coming back into stephenville after the state championship and seeing a sign that said “Taylor for President “. I believe he could have won!! So many great moments and memories of Coach Taylor. He instilled Honeybee pride in all of us who played for him. Sincerest condolences to the family.
Comment Share
Share via:
LY

Posted Jul 25, 2019 at 05:37pm
Our thoughts and prayers are with you during this difficult season.

Posted Jul 25, 2019 at 04:56pm
What an endearing effect Sam had on my life. Being the third coach in four years I always felt our team helped Sam become a winning State coach. But he was a huge part developing a moral code that has stayed with me always. Love, Susie Sanford McCarty
Comment Share
Share via: 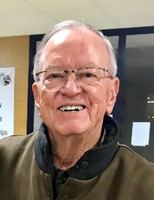