To share your memory on the wall of Thelma Fay Howell, sign in using one of the following options:

Provide comfort for the family of Thelma Fay Howell with a meaningful gesture of sympathy.

Thelma Fay Howell, 93, loving wife, mother, grandmother, sister, aunt, and friend went to be with the Lord on Saturday, June 1, 2019 in Stephenville.

Thelma Fay Howell, 93, loving wife, mother, grandmother, sister, aunt, and friend went to be with the Lord on Saturday, June 1, 2019 in Stephenville.

Funeral services will be held at 11:00 AM Thursday, June 6th at Stephenville Funeral Home Chapel with Dr. Ken May officiating. A private family burial will follow at West End Cemetery. Visitation will begin at 10:00 AM, one hour prior to services.

Fay was born on July 6, 1925 in Iredell, Texas to the late William Albert Hensley and Martha Pearl Scott Hensley. She moved to Stephenville in 1944. Fay worked as a nurse at Stephenville Hospital, where she met her husband to be, Latham Lee Howell. Fay and Latham were married on February 21, 1946. She also worked at Tarleton State University for 13 years. Fay and Latham spent their retirement years traveling across the U.S. and Canada as members of the Stephenville Senior Travel Club. They also enjoyed spending winter months at The Tip of Texas RV Park in Pharr, Texas. Fay was a member of the First Baptist Church of Stephenville for over 70 years. She was also a member of the Chapel Class and Prime Time Senior Choir. She very much enjoyed the time she spent at the Stephenville Senior Citizens Center playing Bridge with all of her friends. Fay loved her family, she loved her friends, and she loved the Lord.

A very special Thank You to Mulberry Manor Nursing Home for the wonderful care and dignity you gave to our Mother.

The Howell family wishes expressions of sympathy be made in the form of donations to Foster’s Home for Children, P. O. Box 978, Stephenville, Texas 76401.
Read Less

To send flowers to the family or plant a tree in memory of Thelma Fay Howell (Hensley), please visit our Heartfelt Sympathies Store.

Receive notifications about information and event scheduling for Thelma Fay

We encourage you to share your most beloved memories of Thelma Fay here, so that the family and other loved ones can always see it. You can upload cherished photographs, or share your favorite stories, and can even comment on those shared by others. 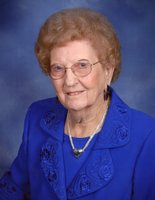 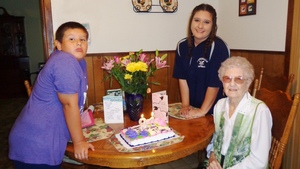 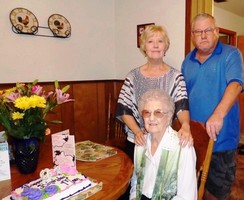